[Two months have already passed since my last review, but here I am. Lots of things were and are still going on, but I couldn’t resist this urge to go back to writing for long. Forgive my being a bit rusty, though. I’ll do my best.]

Before leaving for our month-long trip to China, we found this little box in our favorite game shop for a ridiculous price. Seen it, bought it. First off, we are huge fans of the original Ticket to Ride. Secondly, we’ve played TTR so many times that we grew a little fed up with it (oh, gosh, I feel like I’m swearing right now). Third, lately we’ve used TTR pretty much as an introduction game to involve non-gamers in our hobby and we always had success. Ticket to Ride is a guarantee, no matter what. And then we bumped into this super-tiny TTR…

Just because I love the Ticket to Ride series, this doesn’t mean everybody does as well. Let me explain shortly what it’s all about.

In the classic TTR – the one with the American map which came out in 2004 – players have 45 little train cars at their disposal to build railway routes across the United States. On each turn, players draw Train Cards, claim a route of a specific color according to the cards they use to pay for it or obtain more Destination Tickets representing the two cities that need to be connected to gain points at the end of the game. The farthest are the two cities, the more points players get if they can connect them. Pretty easy, huh? Problems come when two people are unconsciously planning to claim the same route or when that white or yellow Train Card you really need just doesn’t want to come out of the deck and you end up wasting precious turns.

TTR is undoubtedly one of the easiest modern board games to teach, learn and play. However, its both strategic and tactical aspects should not be underestimated.

TTR has an infinite number of expansions and parallel games which transpose the same mechanics in different places all around the world. It took us to the Northern Countries and India; to snowy Switzerland and Legendary Asia… So, the big question is… Did we really need a tiny TTR set in New York City? Oh, yes. We definitely did!

TTR:NY is not just a smaller version of the original game, it has something very peculiar which differentiates it from all its bigger relatives: it’s… small, indeed. Weird, doesn’t it? But, wait, first things first.

The thing you notice immediately opening the box is the rulebook. It looks like a flier for tourists, inviting you to visit the gorgeous city of New York. Short, colored and extremely clear, it allows you to read quickly and start playing right away.

TTR:NY is played on a beautiful colored map depicting all the major neighborhoods of the Big Apple, from Brooklyn to Times Square, from Chinatown to Central Park. Players receive Destination Ticket cards representing the neighborhoods they need to connect and ONLY 15 little taxis to try to do it. 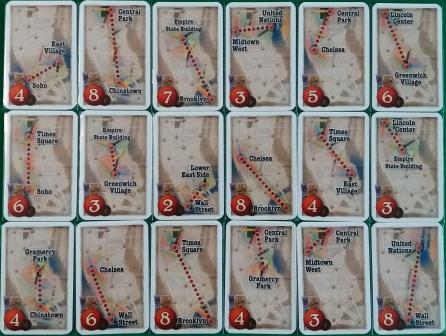 On each turn, they can draw Transportation Cards, claim a route on the board or obtain more Destination Tickets. Seems familiar, doesn’t it? The game ends when a player has two or less taxis left in his supply. Then points are added up and the player with the highest score wins, of course. The scoresheets provided are functional and easy to use (there weren’t any in the old game).

Initially I thought this game was really nothing new. It looked like just an easier version of TTR. In the final scoring, we add up the points for each claimed route and for each completed Destination Tickets and we subtract those for the Tickets we didn’t complete. But – hey, the first difference, here! – players score points also for any Tourist Attraction connected to one or more claimed routes. For example, Chelsea is considered a Tourist Attraction while Lincoln Center is not. This means that our claimed routes have an intrinsic higher value if we pass through tourist neighborhoods and we might score more points with a single Ticket than one of our opponents who completed two tickets. Having some locations with a different value leads us to choose our routes more carefully. This aspect is completely absent in the original TTR.

The map being so small, players can’t wait for things to happen: they need to make them happen. Unlike TTR, they can’t just start collecting Transportation Cards and see what happens on the board: when it’s their turn again, it might be too late. Exactly because the board is small, claiming routes as soon as possible is a key element. The pace of this game is really what differentiates it from its famous parent. Everything is just fast, and if you are not quick enough, the best routes will be gone in the blink of an eye and you won’t have enough taxis left to do a big detour as it could happen in TTR, where the high number of train cars at your disposal is a sort of parachute when things start to go wrong.

YOU CAN’T JUST SIMPLY PLAY TTR:NY IN THE SAME WAY YOU PLAY THE CLASSIC TICKET TO RIDE! That’s my conclusion.

Different skills come into play, that’s the truth. In the original game, long-term strategy and the ability to look at the big picture are the most important things. In this one, flexibility, promptness and short-term strategy are key. That’s why I lost my first games at TTR:NY… I expected it to be just like its parent. Wrong. A different game, exactly because of the smaller board and the fewer cars.

Playing TTR:NY is simply fun. Games are really fast and one follows the other in quick succession. It’s easy to learn even for kids or those who have never played Ticket to Ride, and this is actually one of the strengths of this game. Now I might use it as an introduction game for newbies instead of the old one.

TTR:NY is too cute opened on the table. The tiny taxis are adorable and I appreciate the fact they didn’t choose the usual red-blue-yellow-green colors, but tried to differentiate it a bit, opting for a bright white and a strong violet. The board is thick and cards have a very good quality. That’s all you need for such a small game.

The thing I like most is the graphics. Those colored Transportation Cards are too cool. Their Sixties feeling gives the game that sophisticated touch that is a pleasure to look at. A plus, for sure. 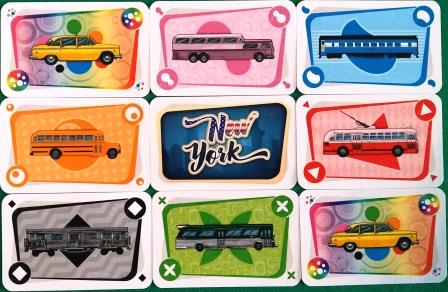 The guy on the cover is clearly Fonzie from the Happy Days series… I love this kind of details in a game. They make it worth it to buy it and play it.

Don’t get me wrong. Ticket to Ride is my first love and it will always be my favorite. But this one… this one… has something special that is making me bring it to the table often and with different people. Definitely approved.

The box contains the following cards:

Did I persuade you to try this game out? Check on AMAZON or on uplay.it! 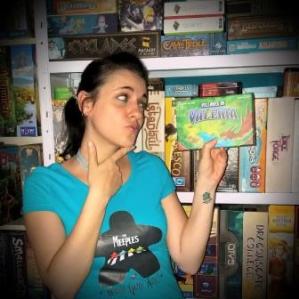 A COSA GIOCHIAMO? – WHAT ARE WE PLAYING THIS WEEK?